I left Australia searching for some sort of excitement to continue studying, which brought me to Grand Rapids, Michigan. Specifically to Grand Valley State University. Here I lived on campus with three amazing American roommates, making a heap of friends from around the world, and immersing myself into life as a college student.

The four months I spent at GVSU were wonderful, although not without challenges. The cold was one of the hardest to get through. I’d never been in snow before and suddenly I was having to walk to class through two feet of snow. In saying that, snow was my favourite part of the whole experience, it makes you feel like you’re in a Winter Wonderland.

But my tip for walking on ice is: don’t get cocky. Ice is a lot slipperier then you might assume and you will slip over and break your elbow (or get hurt badly) as one of the British exchange students found.

Throughout this time I was able to travel to Chicago, the Windy City, and up to Charlevoix in northern Michigan. I also spent Thanksgiving in Detroit, getting to see the third largest Thanksgiving parade in the country.

After university finished I stayed to travel more, going to Toronto and Montreal in Canada for Christmas where it got down to negative 20 degrees. New Years was spent in New York City, a night I will remember forever! Next was Washington DC, then Pittsburgh (the City of Bridges), Cincinnati, Nashville and the Jack Daniel’s Distillery, and finally ending in New Orleans.

By far this experience has shaped my future, my career, and myself. It’s given me lifelong friends and a second home, making me a Laker For Life. 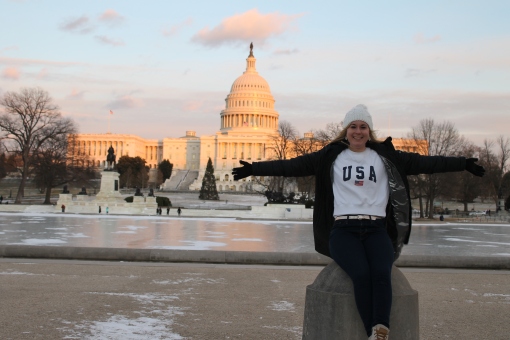