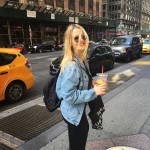 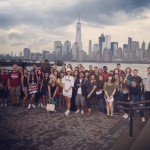 Putting into words the journey you so deeply embark on when studying abroad is difficult. I always knew that I wanted to study abroad but I never thought it would actually turn into a reality.

Stepping out of New York’s JFK airport on the 30th of August at 10.30 pm I was greeted by Rider University’s Study abroad staff and taken in a mini bus to Rider’s campus in Lawrenceville, New Jersey. Riders campus is so cute, there is a crazy amount of squirrels, I still have to refrain from taking out my phone and snap chatting every one I see. Rider has honestly become my home away from home. I have met some of the most amazing people and have made epic friends from all over the world that I now have connections with, now, and probably for the rest of my life. I have done and experienced things I never thought I was capable of and I’m so thankful for that.

So far I’ve spent a lot of time in New York and visited Philadelphia and Detroit Michigan and I’m heading to Boston, MA next week, and Toronto in Canada for Thanks Giving. I would probably never have been to these places if it wasn’t for this study abroad opportunity.

America is pretty much everything that I expected it to be and more. Fraternities and sororities are actually a real thing and they have real red cups at parties. I can’t tell you how many times an American has told me they would love to go to Australia but they’re scared to get eaten by big spiders and snakes, which still confuses me.

The staff at Rider University’s international office have been amazing, besides being super friendly and welcoming they are there to assist and help you in everyway and they always have lollies too. If you’re thinking about studying abroad, whether its in America or Europe or wherever you wish, I urge you to do it. It might be the scariest thing you’ve ever done but I promise you it will be worth it.