I’ve always had a strong interest in Asian culture, more specifically Chinese culture. I figured, “What better time then now to travel over there and study at one of our partner universities”. It’s a massive jump from the Chinese martial arts section of the video store, where my two brothers and I would argue over who would win in a fight out of Bruce Lee, Jackie Chan and Jet Li. While both of them went on to become professional Muay Thai fighters and world title-holders, I chose to pursue an International Business degree at USC. I chose USC because the university is both modern & organic in a sense that it embraces innovation, which I love.

In 1976, Edward T. Hall developed the cultural iceberg model. He suggested that for every culture there are both external & internal parts. The external (above water), or conscious part is what we, as outsiders see. These include things like behaviour, language, traditional clothing, food, and music. While on the other hand, the internal (beneath the surface), or unconscious part of culture is what often goes unseen. It explains the reasoning behind a culture’s external characteristics. Things like cultural values, norms, and beliefs.

After studying cross-cultural management at USC, paired with a newfound appreciation and understanding of the theory of cultural dimensions (Geert Hofstede), I felt better prepared to take the next step in furthering my cultural studies overseas.

Several factors influenced my decision to study at the I-SHOU University (ISU) in Kaohsiung, Taiwan. The first was strategic. As an international business student, I know that Australia’s biggest trading partner is China. I also know that a majority of Austrade’s offices have moved away from Europe into Asia. So I definitely wanted to study in a Chinese speaking country, where I could learn more about the culture and the language, hopefully increasing my competitiveness as a potential employee. Secondly, as I mentioned earlier, I’ve always had an interest in Chinese culture, so when the opportunity came, the decision was quite easy. 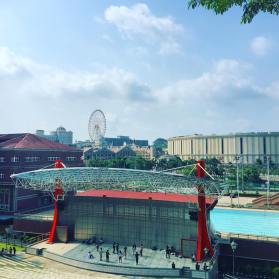 I met with Brenton at USC International, who along with the staff at Student Central and FAB, helped forward my application, organise overseas courses, and find funding. In addition, I made contact with a student named Zak Gray. Zak studied at ISU before me and also gives lessons in Chinese speaking, reading, and writing (very talented guy). I took lessons with Zak for a few months before I left for Taiwan, so by the time I got there, I could already ask for directions, order food, and use public transport. I highly suggest to any students planning on studying in China or learning the Chinese language, get in contact with Zak! He’ll have you speaking Chinese and reading traditional Chinese characters in no time (not to put any pressure on him, but yeah he’s awesome).

During orientation day at ISU, I was able to impress staff & students as the only foreign student to introduce him/herself in Chinese. There’s just something about a foreigner speaking Chinese that they all love. Seriously, people were really shocked to hear an Australian exchange student speak Chinese on the first day. Unbeknownst to me, this would trigger the chain of events that would soon follow. I was invited to perform at the Dean’s Awards Ceremony, where I sang a famous Chinese song called, The Moon Represents my Heart (月亮代表我的心), by Taiwan’s very own Teresa Teng. I then received and email from the chair of Leisure Management at ISU who asked if I would be interested in participating in the annual English Camp, where high school students from Taiwan, mainland China, and Indonesia visit ISU, take a tour of the campus, participate in fun activities, and practice their English. Although this event was cutting it close to exam block, I agreed, and God I am so happy I did! The kids were great and you can tell by the selfie we took together that we had a ton of fun. They all added me on Facebook so that whenever they want to practice a little English they can just drop me a message.

One thing is for sure, from an Aussie student’s study load perspective, ISU definitely push their students to their limits. Where fulltime study in Australia is considered 4 courses a semester, many students at ISU study 9 courses a semester. Where the passing grade at home is 50%, their passing grade is 60%. I found myself at times having to remember that within different cultures, there are different values. It wasn’t really an, ‘I say, you do’ situation for students, but they definitely work hard. As a foreigner I just had to respect their culture and accept the fact that that is how they do things here.

In my Chinese literature course, my professor granted extra credit to myself and three other students for travelling north to Tainan one weekend and doing a piece on one of Taiwan’s most famous writers, Yang Kui, who revolutionized reported literature in Taiwan and dedicated his life to the equal rights of Chinese people during Japan’s rule of Taiwan during WWII.

In my Technology & Innovation management course, my professor agreed to award extra credits to students that provided an extra report based on the life of Steve Jobs and the development of the Apple empire. I am proud to say that the entire class was open to this suggestion and a majority of them earned the extra credit. I’d also like to add that ISU also offer FREE Chinese language classes to anyone who is interested (great opportunity!). 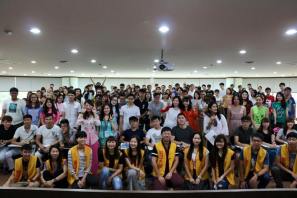 A lot of people say that within Chinese culture, people have only one way of thinking. One single mind set that can never be changed. I disagree. In my experience overseas I have found they are aware of this, and younger generations are in fact more open minded and innovative. Chinese students were supportive of my suggestions in class mainly because they were able to see the vision behind it, and they appreciated that it was for the wellbeing of the entire class, not just me (collective

In conclusion, the semester I spent in Taiwan was definitely life changing. Participating in the Study Overseas program at USC is probably one of the best and most rewarding decisions I have made during my university career. To anyone thinking of studying overseas, do it! Don’t waste time! Stop procrastinating! “You only get one shot. Do not miss your chance to blow. This opportunity comes once in a lifetime.” Yes, I just quoted Eminem… 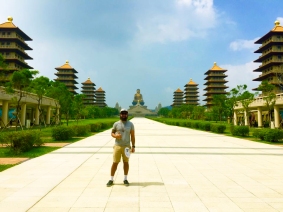 Incase you’re in need of more convincing, on top of my awesome study experience at ISU, I made lifelong friends with people from all around the globe, in fact, I hope to travel to Bali next break to meet up with a few of them. I also spent New Years in Taipei and saw the fireworks shoot off of the Taipei101 tower.

If you’re a food lover, I tried stinky tofu and other famous dishes from places like Hong Kong, India, Thailand, Vietnam, Korea, Japan, Indonesia, and Malaysia (all restaurants in Kaohsiung city!). The night markets are amazing! Street food is cheap, but if you’re not game enough to eat strange things, don’t ask, just eat. One night I ate one of the best tasting hotdogs of my life, only to find out it was made from pig intestines. It’s all part of the experience and I wouldn’t change a thing.

I learned about the story of the first Buddha. Who knew Buddhism originates from Nepal! I also spent a few days at a backpackers on the Sun Moon Lake in Taichung (centre of Taiwan). I hiked 20km through Xitou Village, and also rode 30km around the lake visiting different temples scattered across the mountain range, something I will never forget.